The following article was written by Mobile Mind owner Shannon Sims and originally published as a two-part guest column in the December 17 and December 31, 2014 editions of our local newspaper The Dahlonega Nugget.

When I first moved my company’s offices to the Sargent Building on the Dahlonega Public Square over a year ago the irony of a cutting-edge technology business being headquartered in a century-old historic building was not lost on us.  I became particularly intrigued when I soon found out that the Sargent Building opened in 1911 as the Dahlonega Hotel and was one of the first buildings in Dahlonega to have electricity.  The electricity was supplied by a dynamo turned by water directed from Yahoola Creek via an aqueduct called the “Hand Ditch”.  It was left still operational by the then bankrupted Consolidated Mining Company at their huge but mainly fruitless gold mine east of town.

The early twentieth century was a time of great technological advancement, including the introduction of electrical power, in the United States.  I began to wonder how much of this technology, besides electricity, was available to the citizens and visitors of Dahlonega back during this incredible period of innovation a hundred years ago.  After several months of research, including the much appreciated assistance of local historian and author, Anne Amerson, I discovered that not only was Dahlonega not the backwoods town as many outsiders may have perceived it, but that it was a city that embraced the many new technologies available at the turn of the last century.

Among the many innovations that emerged during the first two decades of the twentieth century, one that was arguably just as important as electrical power was the automobile.  These newfangled “horseless carriages” were a sight in Dahlonega as early as 1906, two years before the production of Henry Ford’s famous Model T.  In May of that year brothers Bob and Frank Meaders purchased a Jeffery’s Rambler in Atlanta and used a team of horses to help get it up the final long steep climb of a hill on the outskirts of Dahlonega.  At the top of the hill Frank cranked it up, revved the two-stroke engine and drove down into town as people gathered on the Public Square to cheer him on.

Postal service in Dahlonega dates back to the founding of the town in 1833 and in 1914 the Postmaster was none other than the aforementioned Frank Meaders.  Back then sending or receiving “snail mail” would have involved only a short walk across the Public Square to the current location of the Dahlonega Tasting Room in the building built by Frank for the main purpose of housing the local post office and the local bank.  At the time, providing an actual location for the post office was the responsibility of the Postmaster after all.  But before automobiles became more widespread waiting for that letter to arrive could have taken weeks.

Radio was still in its infancy a century ago and primarily being used for wireless telegraph utilizing the well known Morse code.  If you happened to have access to electrical power and could build your own amateur radio kit you could tap out messages to a handful of other “ham” operators around the Southeast, but not much else.  Sending an official telegraph message to any major town or city still required a trip to a commercial telegraph station, the closest one of which was located in Gainesville.

For the fastest and most reliable communication nothing could beat the telephone.  And apparently, like most of the cutting edge technologies of the era, the Meaders brothers had to have it.  So in 1900, Bob and three partners built a phone line all the way to Gainesville to provide telephone service for such places as venerable North Georgia College, the doomed Consolidated Mining Company, and Bob’s family’s general store in their corner building on the Square where The Dahlonega Fudge Factory presently resides.  By 1914 the Bell companies and their exchanges had come to town and hundreds of residences in Dahlonega and Lumpkin County were connected to the rest of the country, and now had phone bills. 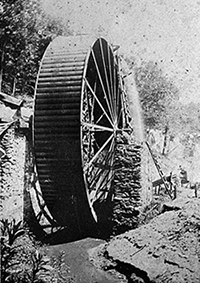 Dahlonega’s adoption of innovative technologies in the early 1900s allowed its citizens and visitors to become more productive and, for the first time in their history, actually have some spare time on their hands.  So I could not help but wonder how they might have spent their free time utilizing the newest technologies of their day.  The first portable cameras had recently  become commercially available and were quickly gaining popularity thanks to the Eastman Kodak Company and their hot selling “Brownie” product line.  Bicycles had made their first appearance in Dahlonega back in 1893 when a stranger rode one into town.  But you would have to wait until the turn of the century before you could purchase one with electric-powered lights.  Silent movies were also becoming a very important form of entertainment but viewing them required the very technology that first piqued my interest:  electricity.   Although several silent movies were filmed in and around Dahlonega, including the The Plunderer in 1915, there wasn’t a movie theater in town until the mid-20s when Robert D. Howser opened one at the location now occupied by the Picnic Café on the south side of the Public Square.  But that was only possible after he installed a giant water wheel at Cane Creek Falls in 1921 to supply electricity to the town and his film projector’s 1000-watt light bulb.  The Hand Ditch that had originally supplied electricity to the town eventually sprung one too many leaks and apparently left Dahlonega in darkness for a number of years.  Such is progress!

~ A special thanks to Anne Amerson and a Happy New Year from Mobile Mind! ~