Commitment starts with first impressions. Physical attributes, cosmetic and practical, as well as the way you operate and interact, can determine your potential for compatibility. Available resources and your intuition about future developments can also sustain or discourage deeper commitment over time, and continued attachment can be influenced by seemingly pragmatic considerations and the recognition that it can become impractical or expensive to change your mind at some later date, reinforcing your initial decision in spite of intractable problems as time goes on. Degrees of investment and pain are at stake, and so is your pride.

Your decision can also be made more difficult when you’re faced with a choice. Prejudice, facts, social pressure, and the pitfalls of misconceptions all come into play when making comparisons. In light of all this, we consider the daunting task of deciding whether to purchase the new Samsung Galaxy S5 or the iPhone 5S. 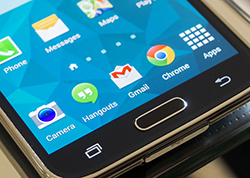 We have Android and iPhone users here at Mobile Mind, and we understand the loyalties. We don’t expect to change your mind if it’s already made up, but we hope to offer some objective observations for first time buyers, or those who sense a timely change in product philosophy.

There are some obvious differences between the S5 and 5S, besides being based on competing operating systems, with a different selection and approach to apps, as well as cross-functional considerations with companion devices like tablets and home computers. We’ll cover that in greater detail in Part Two, but for now we’ll contrast the physical features.

If size matters, consider that the body and screen of the Galaxy S5 are substantially larger than those of the iPhone, which can be an advantage or disadvantage, depending upon what’s important to you. The Samsung has a 5.1 inch screen with greater pixel resolution, compared to the 4 inch screen of the iPhone, which means it’s easier to view movies, videos, and just about anything else on the S5. But the smaller iPhone is more portable, and easier to operate with one hand. So for smaller hands and smaller pockets (not a euphemism), the iPhone might be a convenient choice, especially if you watch your movies on other devices anyway. But if you are streaming movies on your phone, the other advantage to the Samsung screen is its bright and dense color saturation, afforded by its Super AMOLED screen.

The quality of the case is another issue, and here again, there are pro’s and con’s to both. The Samsung phone has gaskets designed to keep it waterproof, but the case itself is plastic, maybe more breakable, and it feels flimsy compared to the iPhone’s sealed metal case. But the iPhone is not waterproof, which can be a liability, and its solid seal means that you have to take it to a dealer to replace the battery, whereas the Samsung case can be opened by the user for battery replacement. And speaking of batteries, it might be interesting to note here that the talk time on a Samsung battery is twenty-one hours, versus ten for the iPhone; and the stand-by time for the Samsung battery is 16.2 days (390 hours) versus 10.4 days (250 hours) for the iPhone.

The iPhone, some critics claim, might be easier for technophobes, with a more intuitive approach, but this, too we’ll discuss in Part Two.

Put a Ring on It

Security is a major concern for all mobile phone users, and the S5 and 5S are two of the first to use fingerprint ID access. There are differences in their approach, however, that offer some clear distinctions. The placement for your fingerprint ID is roughly the same for the S5 and 5S, but the iPhone uses a single touch and an ID digit; while on the Galaxy, you’ll swipe your finger on the screen. This brings up the issue of convenience. Early comments indicate that, while the single touch of the iPhone works almost every time, the Galaxy is less accurate and may take a few tries, especially during the learning curve, while you’re getting used to the feel of moving your finger over its scanner. 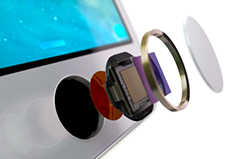 The actual security ability of these systems has come into question. A sales rep at the Apple store claimed that the Samsung system was hacked within the first two weeks of its introduction. And one critique we read documented a method for breaking into the iPhone, although it sounded like a mission improbable, requiring observation of the user’s check digit, then lifting a fingerprint off the phone with tape and re-creating it with the use of a gel.

But the Galaxy S5 fingerprint system scores points for its versatility. The S5 system can be used to validate PayPal purchases, and has the added benefit that developers can incorporate use of its fingerprint technology in apps. The iPhone’s Touch ID sensor is locked down, so it can only be used to open the phone or authorize purchases on iTunes. These kinds of “closed” systems will be dealt with in more detail in Part Two, when we discuss compatibility within families or suites of devices, where you can feel locked in to brand loyalty, whether you intended it or not. 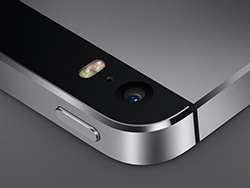 The iPhone 5S is available with 32 GB or 64 GB of built-in storage, with a jump in price, of course, from one to the other. The Samsung S5 typically comes with 16 GB, but 32 GB models can be found. But the ability to insert memory cards in the Samsung, at about $20 for 32 GB makes the S5 more expandable for a reasonable amount of money.  And you will definitely need as much storage capacity as you can muster for the Galaxy S5 considering it comes with a camera/camcorder with twice the resolution of the iPhone  (16 megapixels vs. 8 megapixels and 4K video vs. 1080p respectively).  But although the S5 eclipses the 5S when it comes to memory capturing capacity the iPhone still comes with cool photo taking features such as image stabilization, face recognition and the much loved panorama mode.  The iPhone also has a dual LED flash and can take pictures while recording video.

Yes, the Samsung boasts faster processing speeds, as it uses a quad core processor versus the iPhone’s dual core. It also has double the system memory of Apple’s current flagship.  But will you notice?  It all depends on the kind of information you plan to access on your device. It certainly will be noticeable if you’re watching movies or playing graphics intensive games on your smartphone where download times and play quality definitely favors Samsung.

Did we mention there’s a Part Two to Choosing Worlds? This is where we will discuss the broader implications of choosing between the iOS and Android family of products. We’ll also explore other competing platforms, and how they interact with the giants of mobile devices in our next post.